The wise hands of Claudia Palmarucci, the life of Maria Sklodowska, one of the greatest scientists of all time won the prestigious BRAW. The Bolognaragazzi Award-BRAW, aimed at highlighting excellence in the world of illustrated books, has been one of the most coveted international awards for children’s publishing for over fifty years. 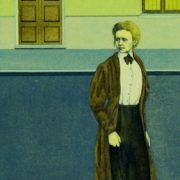 The BRAW represents one of the most important springboards in the world, thanks to the attention paid to the winners by all the media and by the thousands of professionals present every year at the Bologna Children’s Book Fair. In fact, the BolognaRagazzi Award is not only an acknowledgement at the editorial level, but a great business opportunity on the international copyright exchange market. Winning this award, or winning one of the honorable mentions, allows you to bring your publication to the attention of worldwide publishing. This is constantly witnessed by the winners of each edition, who proudly put the emblem of the prize on the cover, and spread its prestige and authority throughout the world. 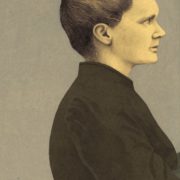 The life of Maria Sklodowska, one of the greatest scientists of all time.

Marie Curie, daughter of a college director and a professor, grows in the conviction that knowledge is the only true wealth of life. And this will be the driving force that will guide his every choice, not least that of facing a thousand sacrifices in order to go to the Sorbonne in Paris, since in his country the universities are closed to women. And then: the degrees in physics and mathematics, the great love for Pierre Curie, the discovery of polonium and radio. Then again, the death of Pierre. It’s her love for her neighbor that leads her to use all her studies and discoveries to assist the wounded in war.

Starting from the biographical notes of Orecchio Acerbo, the leading publisher of Claudia Palmarucci, in which it is well emphasized how to imagine that the famous frescoes of the Chaplain of Saint Nicholas of his city and the fine arts scattered around induced Claudia, born in Tolentino (MC) in 1985, to undertake art studies at the Academy of Fine Arts in Macerata. Certainly, Claudia Palmarucci constantly looks to the great masters of painting, whether it be Watteau rather than Rubens, and to the illustration she dedicates her energies and her thoughts. He began in 2009 the collaboration with Ear Acerbo, with the publisher works on the project of the book La Rosa, which in 2011 will become his debut volume with which she was selected at “Illustrar’arte 2011” and the prestigious “CJ Picture Book 2011”. 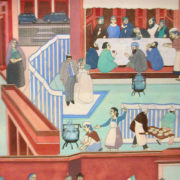 In 2014 the idea of the Tricromia gallery to create a collective illustration inspired by the writings of Isaac Bashevis Singer born from the passion of Lucie Müllerovà and Maurizio Quarello for the great Jewish-Polish author, Nobel Prize. Passion transmitted to illustrators living in the Marches, Italians and foreigners who elected Macerata as a meeting point and artistic and cultural exchange so as to form a group called “The school of the Marche”.

2015 is the year of even more important successes: it is among the selected at the Nami Contest in Korea and at the International Children’s Illustration Exhibition The images of fantasy 33 in Sàrmede in Italy. For the third time (the previous occasions were in 2011 and 2013) he is among the selected at the Illustrators’ Exhibition of the Bologna Children’s Book Fair. In 2016 Le case degli altri bambini (Orecchio Acerbo, 2015) received a special mention in the category Opera Prima at the prestigious BRAW (Bologna Ragazzi Award). He has exhibited his works in numerous solo and group exhibitions, in Italy and abroad. Tricromia in 2017 presents with Claudia Palmarucci the exhibition No woman in the world, dedicated to the delicate theme of feminicide introduced by a note by Nadia Terranova. His books are translated in France, Switzerland and China and he has collaborated with the publishing houses Orecchio Acerbo, Roma (Italy) Éditions Notari, Genève (Switzerland) Kite Edizioni, Padova (Italy) Eli Edizioni, Loreto (Italy) Rizzoli Editore, Milano (Italy) Editions Cambourakis, Paris (France).